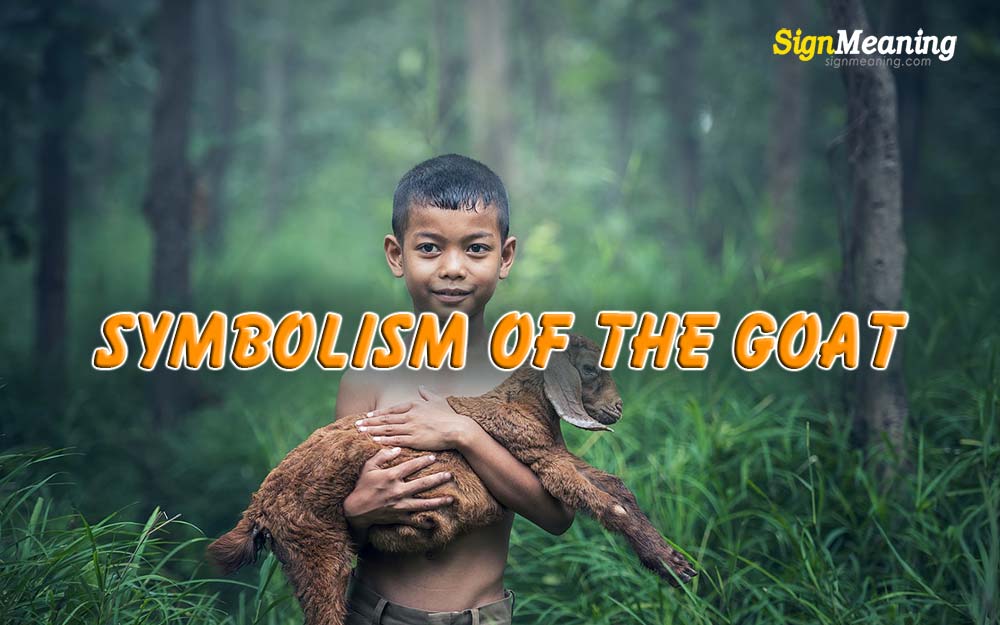 What is the symbolism of the goat? It might seem like a simple and noisy farm animal, but it’s so much more than that! In this article, we’ll discuss all the symbols associated with the goat, as well as what it means to have it as a spirit animal.

The goat repeatedly appears in mythologies all over the world. What is the symbolism of the goat when it comes to myths and legends?

Pan was a Greek god who was half-man and half-goat. He is a deity that represents shepherds, as well as herds and the wild outdoors. He is deeply associated with fertility, passion, and sex, and is well known for seducing young maidens.

The God Pan is linked to the arts, alcohol, and decadence, so though he’s a benevolent deity, he’s also prone to overindulgence, which is a trait also associated with goats.

Roman mythology had a similar figure, known as Faunus, also represented as a man with goat characteristics, such as hairy legs, horns, and a furry tail.

Even the zodiac signs have an astrological figure for the goat. Capricorn is deeply linked with this animal, and those born under its star are usually bright and determined people, prone to excess. They also can be incredibly patient when they have a plan in mind, moving towards it with relentless determination.

Capricorn is the tenth astrological sign, and it’s usually referred to as the sea-goat, a mix between the goat and a fish, revealed in its scaly tail.

Goats were seen as one of the best animals to sacrifice to ancient deities, as they represented wealth and power. This meant that you were offering both these traits to the Gods and were more likely to receive your heart’s desire.

Some cultures viewed them as wicked beasts, though this is most predominant in the bible, as we’ll analyze next.

What is the symbolism of the goat in the bible? The holy scriptures mention this animal plenty of times, so different passages are featuring it.

A few examples we can mention are:

“Before him will be gathered all the nations, and he will separate people one from another as a shepherd separates the sheep from the goats.” Matthew 25:32

“For it is impossible for the blood of bulls and goats to take away sins.” Hebrews 10:4

Goats were considered valuable properties back then, and sacrificing one as a sin offering as deemed acceptable. They were also viewed quite differently from other cultures, as the goat was a symbol of wickedness and demonic influences.

They were associated with sinners who refused to repent, and who would be unable to be by God’s side on judgment day. By offering this animal as a sin offering, believers were also showing their determination to atone for their crimes.

Those people who feel like their spirit animal is the goat, are usually determined and highly persistent. They are not afraid of working hard in order to reach their goals and dreams. No matter how many obstacles stand in their way, they’ll continue to move forward until they reach their destination.

They tend to be highly curious and eager to learn, being alert to their surroundings and the people who approach them.

Goats are deeply associated with seduction, virility, and fertility, so it’s no wonder those who keep the goat as a totem animal are prone to seduction and philandering. When they fall in love, though, they tend to be loyal to a fault, overly sexual, and eager to start a family. They may seem intense as a partner, but they make up for it with their attentive nature, sweet disposition, and upbeat energy.

They can also tend to grow bored quickly if they feel stuck, so it’s essential to search for hobbies or distractions. Those who feel a connection with this spirit animal usually are happier when trying new experiences and having fun. They prefer to go out and meet new people than stay at home for a quiet night in.

Having the goat as a totem animal usually means you are fearless, determined to move forward no matter the obstacles and the struggles they may face. This goes hand in hand with their ambition and hunger for new experiences: They are ambitious and stop at nothing to achieve the goals they set for themselves.

There’s nothing people under this spirit animal care more about than their honor. They’ll stick behind their ideals no matter the consequences, even to the point of stubbornness. This is usually viewed as a positive trait, though it’s important not to allow their beliefs to blind them to reality.

The goat is deeply associated, as well, with intuition and gut-feelings. It’s quite common for people identifying with it to make rush decisions in the spur of the moment. They can’t quite explain the reason behind these choices, and explain they simply ‘felt it was the right move to make.’ This is their gut-feeling guiding them to the right path, and it’s wise to follow behind them, as they’ll rarely fail when it comes to their intuition.

Related post: What Does the Elephant Symbolize? Elephant in Dream Meaning

Admittedly, most people don’t see goats very often unless they live in or near a farm. But when you are close to one, you should try and pay attention to its behavior. If you feel like its staring intently at you, it might mean more than you might believe.

In these scenarios, the farm goat usually represents abundance, and you’ll be experiencing great success in the future. It may be a monetary reward, though it’s not necessarily linked to wealth. You might be offered an opportunity to try a new experience, like traveling abroad or learning a new skill. It’s essential you accept this chance, as you’ll be deeply rewarded by this new adventure.

A mountain goat, instead, represents obstacles and struggles. Don’t worry, however, as it’s still good news: The problems that’ll stand in your way will only make achieving your dreams more satisfying in the long run. You’ll have to resort to your determination and endurance, but in the end, you’ll be granted a great reward if you follow your dreams against the odds.