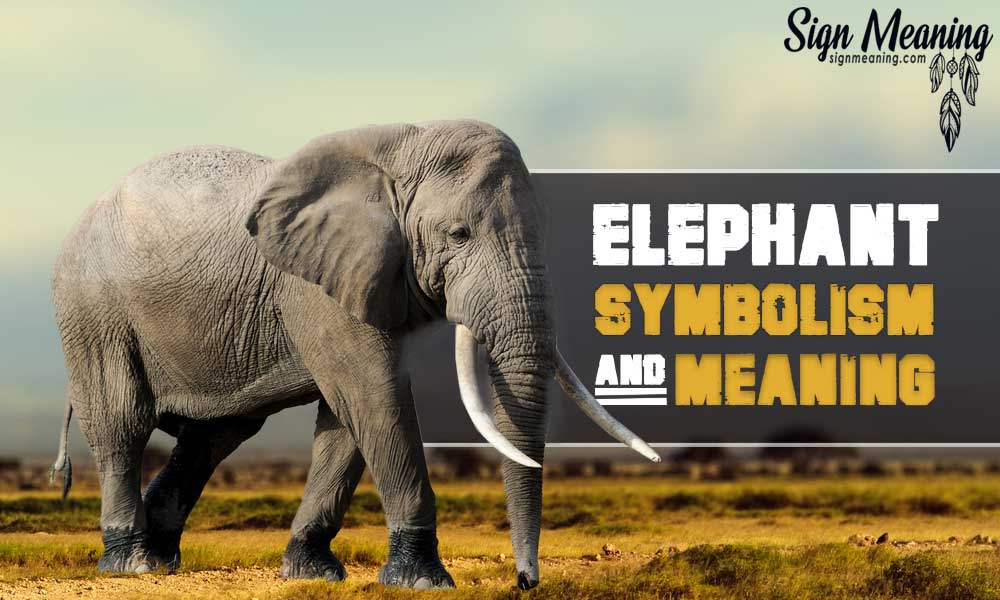 In many cultures around the world, elephants hold a significant meaning and symbolism. So what does the elephant symbolize in our lives in general? Elephants are considered wise and gentle spirit animals, which exemplify power and strength. But there are several different interpretations, meanings, and symbolism that we can associate with elephants. Usually, the animal is pretty significant in the Asian culture, particularly with people that practice Buddhism and Hinduism.

Generally, the universal meaning of the elephant is power and strength and could refer to both the mind and the body. Elephants are also considered as a spirit guide that can help us with our journey through life, encouraging us to be more patient.

The elephant may also symbolize wisdom, stability, loyalty, intelligence, sensitivity, peace, determination, and reliability. All these characteristics are what you can observe in the traits of the elephants while in the wild. These gentle giants are among those animals that know how to show their care towards their offspring and herd. They symbolize determination, loyalty, and responsibility.

Elephants also signify patience. They are known for their calm and gentle nature. Compared to other creatures in the wild, the elephants are mellow, unless of course, they are threatened and most especially if it involves the herd. Nevertheless, these animals are slow to anger and are a great representation of calmness and patience.

Elephants are humungous animals. They are capable of doing a lot of damage if they want to because of their gigantic physical appearance. However, being destructive is not really their nature. This is why elephants are also seen as a symbol of power. And because of their gentle nature, they are more admirable.

What Does It Mean When See Elephants in Your Dream?

If you are seeing an elephant in dream, this could mean a lot of things. Since the animal is seen as the symbol of patience, your dream could mean that you have to be more understanding and patient of people around you.

If you consider yourself an introvert, the elephant that you see in your dream may actually be a representation of your own character. In some instances, people see themselves riding an elephant on their dreams. This could signify that you’re someone who wants to be in control of things or that you possess some leadership skills.

When it comes to the elephant spiritual meaning, the message may have something to do with your ability to connect with someone else. Are you losing intimacy with your partner? Is there someone in your life that you have lost touch with? You may need to take some time to meditate and hone your empathetic skills. That way, you’ll be more attuned to the people around you at the deepest level.

During drought, the mother elephant exemplifies selflessness. She will make sure to look after her calf and keep them cool using the water on her own stomach. In this regard, you may need to think about your commitment to your family and see if there’s something that you lack in terms of your responsibility towards the people around you.

People who are struggling with sexual issues might also find elephant in dream too often. The elephant can help to expand your awareness of all your sensuality and senses. This can somehow help to unleash your affection that will stem from compassion and trust.

The elephant is a significant feature in the Far Eastern symbolism. Its most striking meanings are those that can be found in different religions practiced by many people around the world. The animal is understood to mingle with the Divine figures and the world.

In Hinduism, the elephant is seen as Lord Ganesh, one of the most popular deities in Hindu mythology. Lord Ganesh has the head of an Elephant and when he is paired with Lakshmi, they are seen as the openers of a certain way. This could refer to getting a new career, personal transformation, new relationship etc. Lord Ganesh himself is considered a God of good fortune, protection, and success.

The elephant is not only a significant symbol in Hinduism but also in Buddhism, which stems from the birth of Buddha. Queen Maya, Buddha’s mother, is said to have gotten pregnant after a white elephant appeared in her dream. In the dream, the elephant offered her a white lotus flower. Upon waking up, she knew right then that the dream was an omen of the divine and that’s when she conceived a child.

The elephant plays a powerful role in the Hindu religion. In fact, Ganesh, which is one of their most favored gods, is depicted as an elephant. Lord Ganesh is said to be the god of removing obstacles and challenges in life. He is also the god of fortune, protection, and luck.

The elephant has a different symbolism in Christianity. In the Christian religion, the elephant is seen as a symbol of patience, chastity, and temperance. The animal is depicted in different ancient works and is believed to represent Adam and Eve.

As you see, the elephant has many different meanings and symbolism. But what it is really trying to tell you is to take good care of your well-being before you think of other people. We won’t be strong and young forever in this world. Therefore, you must make some effort to keep your mind, body, and soul nourished!

5 thoughts on “What Does the Elephant Symbolize? Elephant in Dream Meaning”