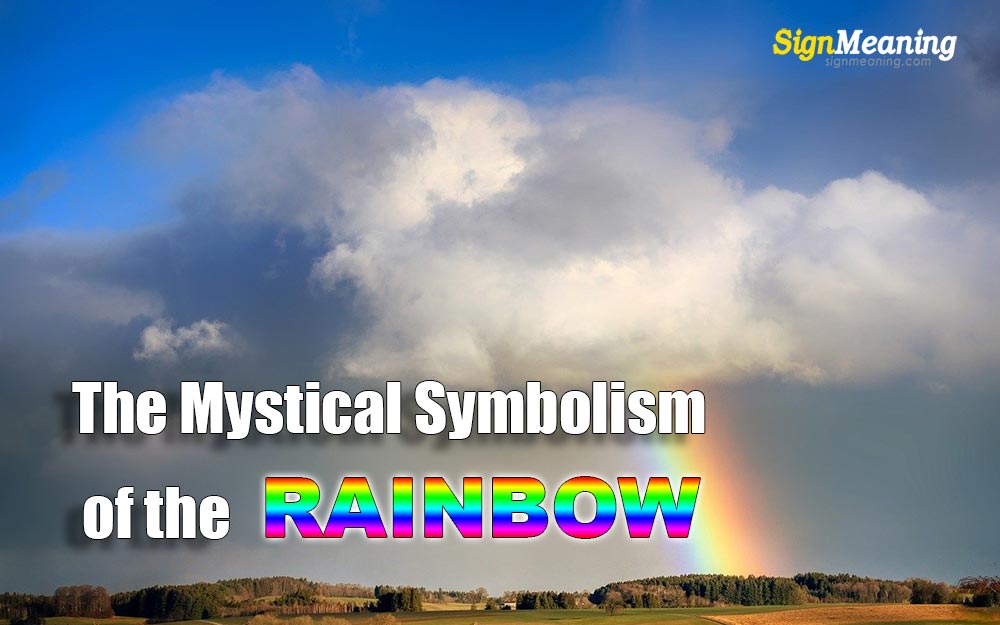 The rainbow has always been associated with good luck and gaining a grand reward. After all, isn’t there supposed to be a pot of gold at the end of each one?

In this article, we’ll take a deeper look at what’s the spiritual meaning of the rainbow and what does it mean when we encounter one.

Spiritual Meaning of The Rainbows

So, what is the meaning of rainbows in the bible? Since the old scriptures, it has always been associated with messages of hope and forgiveness, coming from God itself.

To better understand this significance, we need to take a closer look at the book of Genesis. Wanting to punish the sinful and wicked, God decided he’d flood the earth, killing those who weren’t pious and worthy. He had Noah gather two of every animal, as well as his family and others who would survive the flood.

During many days, Noah’s ark roamed the seas, not knowing when the water level would descend and they’d be able to return to land. When one of the doves he freed into the air returned with an olive branch, he knew it was time to descend from the ark.

After the flood was over, God placed the rainbow high in the sky, as a promise to both Noah and all of mankind. It was a sign that he would never again destroy the earth or those who dwelled on it.

Each time it rained, humankind would be able to look up into the sky and see a rainbow as the sun emerged from behind the clouds. This was a reminder of God’s promise and the covenant he made with the earth as a whole.

So seeing a rainbow is considered a blessing in the catholic and Jewish faiths, and meant to bring good fortune and happiness after a dark time. It’s also a sign that people should keep their hopes up even in the face of adversity, as the problems will eventually disappear and those who have endured will reap the rewards of their efforts.

There are other spiritual meanings of the rainbow, however, as plenty of cultures and religions have addressed this beautiful phenomenon.

The nordic religion believes this is a bridge built by the Gods themselves, and it’s the only way of passage between Earth, also known as Midgard and other realms, like the Valhalla. This bridge was called the Bifrost.

Greek and Roman myths tell a similar story, as they consider that a messenger of the Gods created the rainbow s a path between Heaven and Earth. This messenger was called Iris, and she helps create a link between humans and the divine, traveling at the speed of light between each location.

Meanwhile, in Chinese Mythology, the rainbow isn’t a path, but rather a way of fixing a problem. Legend says that the sky was ripped apart, and the slit remained opened no matter what people attempted to do to solve it. The Goddess Nuwa found the solution by crafting a seal made out of grand stones of different colors.

According to the Irishmen, the end of the rainbow is the spot where the leprechauns hide their pots of gold. This location is impossible to reach, as the rainbow is an optical illusion and will continue to stretch forward the more you move ahead.

However, legend claims that if you ever actually reach this spot, you will be granted the gold in the magical being’s pot. As the leprechaun in mischievous and escapes from humankind, if he is caught by a person, they’ll desperately try to get away. They’ll grant their captor three wishes in order to pay for their freedom.

Also see: What Does It Mean When Your nose itches?

Symbolism of the Rainbow

The rainbow is a symbol of hope, dreams, fulfillment, and happiness. It also stands for being true to oneself and getting in touch with the desires lurking beneath the surface.

Perhaps we are keeping our real needs and wants, locked away, pretending we are happy with our lives when in reality we are aching for a chance. The rainbow represents this and pushes us to try and strive for these dreams.

Another important symbolism of the rainbow is related to intuition and self-awareness. It’s important we follow our inner voice and change paths if it doesn’t feel like we are doing what’s best for us. This is especially true if we are avoiding doing something simply because it’s harder.

Just as it’s hard reaching the end of the rainbow and reaping the rewards for our efforts, so is the case with adversity. If we choose to take the most difficult road, then when we reach our destination, we will be even happier and more fulfilled.

It’s also said that the rainbow is deeply connected with the world of the spirits. It works as a sort of passage for the dead to be able to communicate with the living. So if you experience an intense spiritual feeling while staring at a rainbow, a loved one who passed away recently or an ancestor might be attempting to communicate with you from the afterlife.

Related post: The Surprising Meaning of Itchy Palms on Your Left Hand

Meaning Behind the Colors of the Rainbow

The spiritual meaning of the rainbow varies depending on the color you focus the most on, or the one you feel a deeper connection to.

The color red represents life and passion, as well as love and energy. It also has negative connotations, such as anger and violence.

Orange, in turn, is the symbol of friendship, sensuality, and abundance. It also can indicate death and decay.

Yellow brings joy, optimism, and hope, and is usually associated deeply with summer and daytime. It can also signify insanity, though, so there’s another side to every story.

Green is the color of nature, as well as health and fertility. It speaks of renewal and brings the hope of receiving money. That being said, it’s also associated with greed.

The color blue is deeply linked with peacefulness and quiet, as well as trust. It can lead to passivity and shyness, though.

Meanwhile, indigo is connected to the spiritual world and our intuition, as well as our connection with the cosmo. It’s said that this is the color of witches and witchcraft.

Finally, the color violet has been linked through the centuries with healing and awareness, as well as imagination and royalty. It can lead to hubris if pride is left unattended, however.