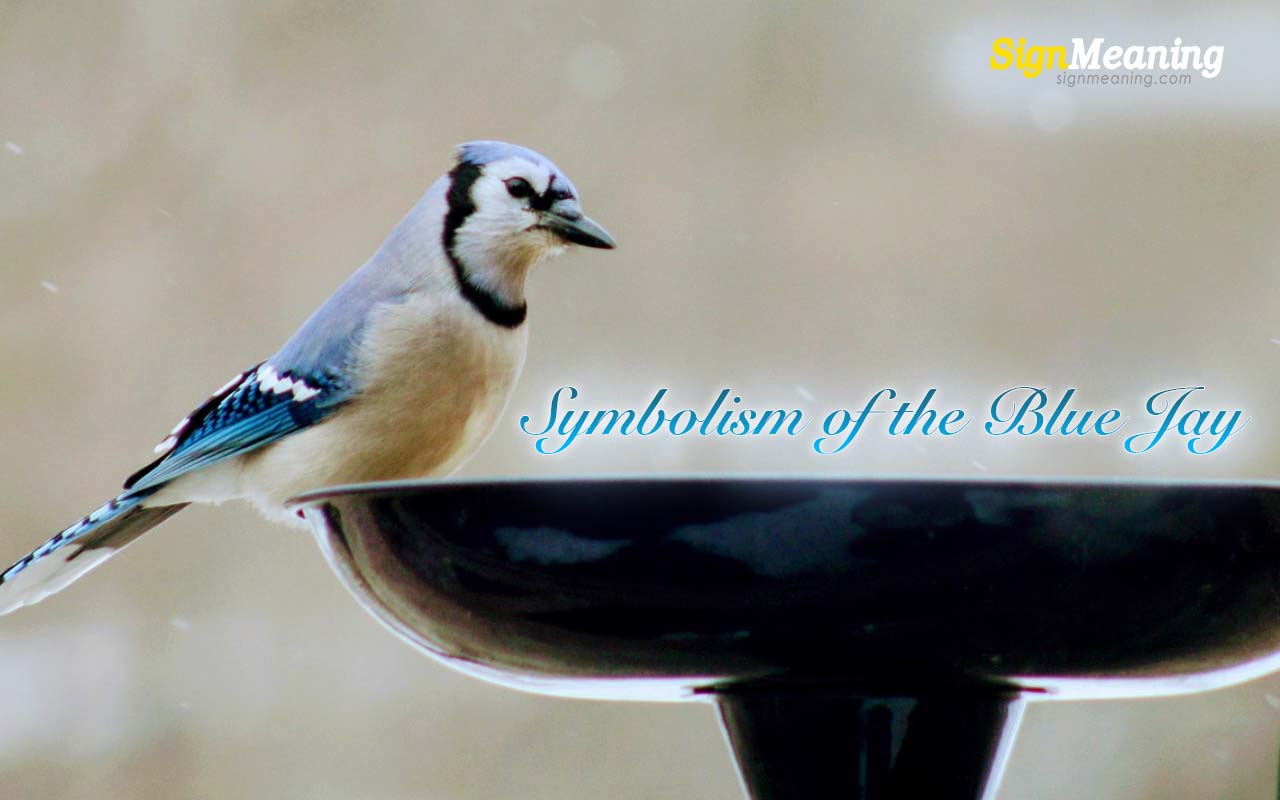 What’s the symbolism of the blue jay? Does seeing one of these beautiful birds in our daily life carry a special significance? It’s important to properly interpret the message being carried by this songbird. In this article, we’ll decipher the different symbols the blue jay represents.

Symbols Associated With the Bluejay

The bluejay is associated with many different symbols, and each carries different influence depending on the situation in which this bird crosses your path.

It’s a confident and determined bird, both competitive, bold and earnest, filled with honest curiosity and passion.  The symbolism of the blue jay are certainly plenty, but this is for good reason, as there are few animals as spiritually complex as this blue songbird.

They usually represent intelligence and security as well, so seeing one usually can be related to feelings of safety and happiness.

Blue jays are deeply associated with clear skies because of the bright blue coloring of their feathers, and they are considered courageous and loyal animals. They are also deeply energetic and determined.

That being said, negative connotations also exist when speaking of the blue jay: They can be associated with stubbornness, pride, and over-protectiveness. When someone feels the bluejay is their spirit animal, they might have an incredibly hard time forgiving others for even small slights.

What Does It Mean When You See A Blue Jay?

The blue jay might be trying to send a message your way when they fly close to your house or sit close to a tree you are walking by.

It’s important to try and be aware of your surroundings, as there are birds flying by all day, every day. If it’s merely an instant before they disappear, it might not carry any important symbology, but pay attention if the blue jay lingers for longer than usual.

Having a blue jay linger close to you for an extended period of time may be a way of letting you know that you are doing a good job at following your dreams. It’s encouraging you to continue down this path.

You tend to be the focus of attention when you speak up, and may sometimes wonder if you shouldn’t try and keep your opinions to yourself. It’s important that you keep expression your thoughts and feelings, as those around you admire this quality, and it’ll eventually help you move forward in your job and your personal life.

If you hear a blue jay singing close to you insistently, then it means that you have been keeping a secret to yourself, and it’s time, to tell the truth about it. It might be hard at first, but in the long run it will be for the best. You might be worried the truth will be harmful, but if you keep it to yourself, it’ll end up being worse than admitting it on your own accord.

You may see two blue jays singing to each other: This means you’ll soon meet a like-minded person you will fall in love with. If you are already in a relationship, then you will soon discover something about your partner you didn’t know till now, and it will help the two of you get closer to one another.

Seeing a bluejay when you are afraid is a way of letting you know that someone in your life has your back and that you are not alone. Try and think who this person would be, and speak to them about the problem you are facing: They will be there to assist you and give you positive advice that’ll help you solve the issue.

What Does It Mean If the Blue Jay is Your Spirit Animal?

The bluebird is an incredibly compelling and strong spirit animal. Those who feel a deep connection to this songbird usually share many of the symbolism associated with it.

People with the blue jay as their spirit animal or totem usually have no problem vocalizing their needs and wants. They can stand up in front of a crowd and easily express their opinions, and they are usually incredibly charismatic.

It’s common for these people to be artistic, especially when it comes to any form of art related to music, like singing or playing an instrument. They are sensitive and creative, most of the time with their heads in the clouds.

As they are such competent public speakers, they usually can perform wonderfully as politicians, musicians, motivators and journalists. They tend to adamantly defend what they believe in and have no problem getting into heated arguments, certain their point of view is the right one.

That being said, those who consider the blue jay to be their spirit animal are not always lost in their thoughts but tend to pursue their dreams no matter the consequences. They can be very stubborn, so it’s hard for them to realize when or if they cross a line. They don’t care about the consequences as long as they reach their destination.

Though they can be quite sensitive and sweet to those they love, incredibly romantic and detail-oriented with their partners, they can also be vicious when it comes to their enemies. They tend to be unforgiving and hold grudges for a long time, and they won’t hesitate in taking revenge whenever they sense there’s an opportunity to do so.

When it comes to those they love, the people born under the blue jay’s influence, tend to be incredibly protective, sometimes even to a fault. They can be aggressive when they feel their families and friends are being attacked. It doesn’t matter if the aggressor is bigger or more influential than them, they’ll still jump into an argument or a fight if that’s what’s needed to keep their loved ones safe.

It’s a bad idea to try and lie to someone who identifies with the blue jay, as they tend to be incredibly earnest and detest lies. They might not immediately notice someone lying to them, but when they do, it’s hard to make it up to them. They offer their loyalties easily, but once they’ve lost trust in someone, it’s almost impossible to recover it.

Another great asset is their confidence: They’ll believe that they can reach for the sky, and this determination will help them actually achieve their dreams. Though they may be hardheaded at times and miss the forest for the trees in their personal pursuit, they usually tend to have the best intentions at heart.