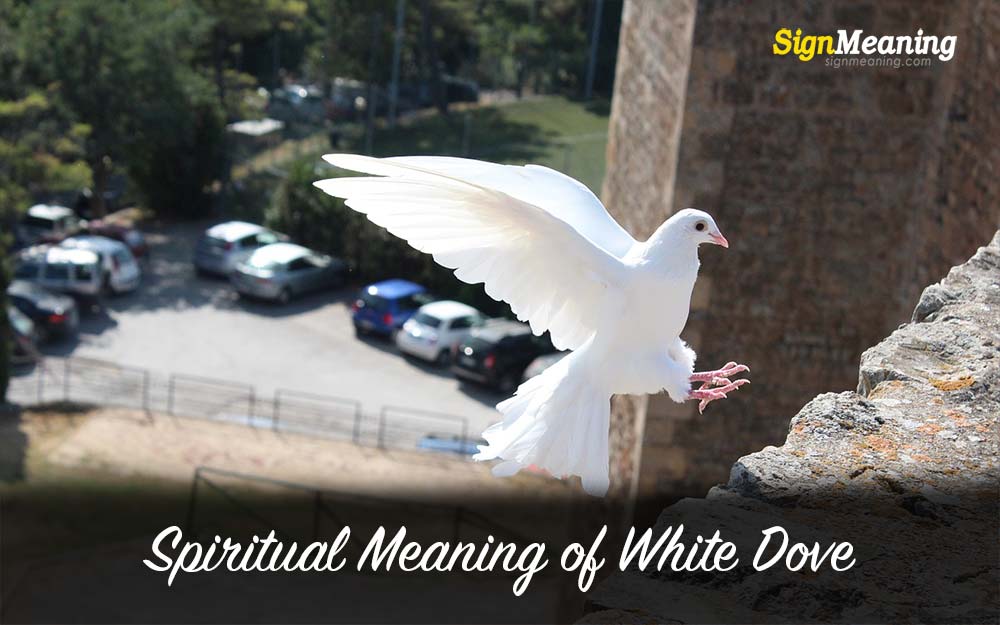 White doves have always been associated with peace, love, and unity. It’s pure white color immediately evokes feelings of union and prosperity. Biblically speaking, the meaning of the white dove goes even deeper, connecting to the very concept of God.

In this article, we’ll discuss the symbology behind the white dove and what messages it may deliver when it crosses our path.

White doves occupy an important part in most major religions. All around the world, different cultures have adopted this beautiful bird as the sign of purity, honor, peace, and prosperity. They tend to represent inspiration and imagination, helping bring light and happiness into the home they enter. Having dove paintings and sculptures helps keep harmony in the house.

This makes sense when we think about how doves are among the first kind of birds successfully domesticated by humankind, many centuries ago. It’s well documented that ancient Egypt owned trained doves over 3000 years ago.

In Mesopotamia, one of the chief goddesses was Ishtar, deity of the sun and deeply associated with both love, devotion and war. It was usually represented by a white dove, or carrying one on the palm of her hand. She’s the first goddess to be described in written form.

In Greek and Roman mythologies, the dove was linked to love and youth, as well as life essence. Both Venus and Aphrodite, the goddess of love and passion in each respective religion, was symbolically linked to the white doves. The meaning of the white dove has always been linked to positive and beautiful concepts.

They are also related to prophesy and fortune tellers, so it’s been said that white doves foretell the future with their presence.

The Hindi religion believes that doves are the true messengers of natures, delivering news from the gods, especially the deity related to death. It’s a sign of great bad luck to kill a white dove, as it’s been said that it will condemn the person who murdered it to a life of eternal sorrow and misery.

In China, the dove is seen as a symbol of both fertility, love, and longevity, as well as perfect faithfulness. Seeing a dove in your wedding day warrants a long and happy marriage, being considered a promise of a bright future.

The emperor usually enjoyed including doves in his court since it was believed that the cooing sounds they emitted had a calming and cooling effect on those who listened.

The scriptures mention the white dove often, linking it to the catholic God. The dove is also a messenger for the divine, being the sign Noah received after the Floor to let him know that the waters had subsided from the earth, and he’d be able to descend from his ark.

During Jesus’ baptism, the Holy Spirit is featured in the shape of a white dove and reaffirms Jesus’ role as the Messiah. It also represents the purity and devotion of the Virgin Mary, so it’s an animal that is rightfully merged with the concept of the divine.

In the bible, doves have been described as innocent and sweet birds, and also deeply linked to peace and wholesome brothership between humans.

The doves are associated with affection and marriage, which is why they are often used during wedding ceremonies. They represent the concept of faithfulness, adoration and true love, as well as the promise the bride and groom make to each other.

Releasing the white doves is considered a perfect sign of peace, endearment and positive notions such as unity and peace.

Seeing a dove during your wedding ceremony or your wedding day is a great sign and it brings promises of lifelong happiness and fidelity. It’s a marriage that’s meant to last for as long as the two of you shall live.

Also see: Spirit Animal and Symbolism of the Blue Jay

Those people who have the dove as their spirit animals are usually kind and gentle, as well as incredibly giving. They usually tend to be innocent and even naive, attracting others to them with their kind nature.

It’s easy to take advantage of these kinds of people, but it’s unwise to do so. Their gentle personality brings great happiness to those that surround them, and so losing their presence in their lives will come as a real blow.

They tend to be incredibly serene and calm, making others around them feel at ease and happy.

These kinds of people tend to be great teachers, nurses, and caretakers, finding joy in helping others and alleviating the pain and struggles other people go through.

Those who are spiritually linked to the white dove, are usually wise, understanding and loving, as well as incredibly creative. They tend to experience life to the fullest, trying to live passionately. They are incredibly loyal and have a strict moral compass. There are few things they won’t forgive, but they can’t ignore someone betraying them.

They are usually great negotiators and help those who are having an argument or a fight find a common ground where to solve their problems.

Grace is another common quality among those who feel a connection with the white dove, and are described as having a great inner beauty that comes across to anyone that meets them.

Though you usually see white doves every single day, it’s important that you pay attention to the little details.

If you are moving into a new home or apartment, and you see a white dove flying around or resting on a tree near this place, then it’s a great sign! It means you’ll find real happiness in this new home, and that you’ll be able to find peace and comfort there.

When trying to get pregnant, if you see doves often, then this means you’ll soon be getting your wish, and you or your partner will soon deliver a healthy and beautiful baby.

If you are going through a period of distress and discomfort, seeing a white dove flying close by or resting near you is a sign that soon you’ll be enjoying clarity and peace of mind, which will allow you to overcome your problems and live a happier, less stressed life.

Another good omen you might receive from a white dove is when you or your loved ones are going through a long period of bad health. This is a sign that in the short run, you’ll recover from your ailments.