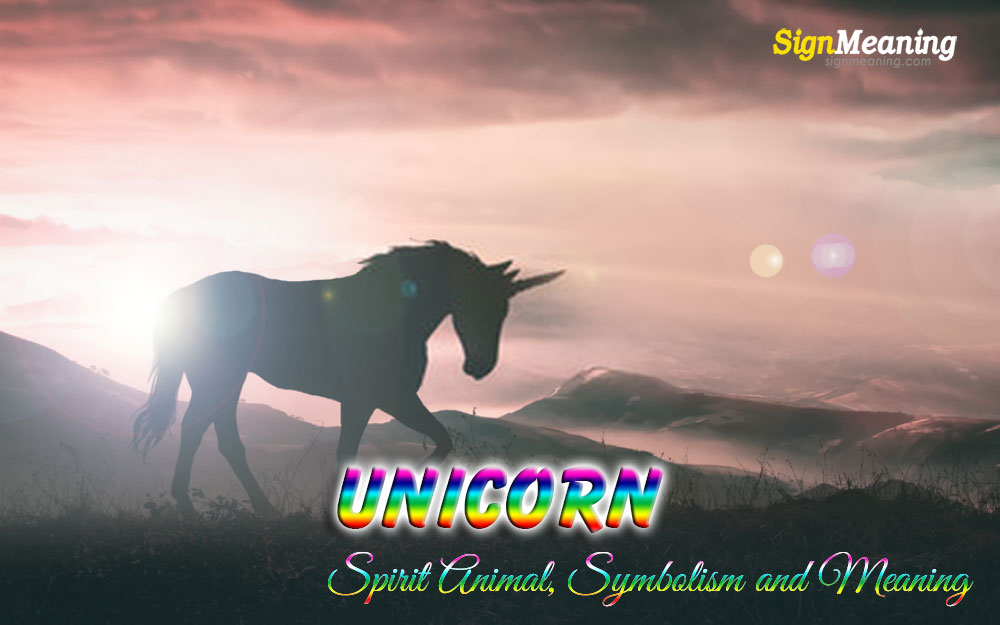 Unicorns are mythical, magic beings that have fascinated mankind for centuries. There are many legends surrounding them, and even more symbolisms. In this article, we’ll discuss what this magical creature represents, what it means to dream about unicorns and to have one as a spirit animal.

Symbolism of the Unicorn

Strangely enough, unicorns are associated both to femininity and masculinity. It’s a distinct parallelism few other animals have, mythological or otherwise.

The white horn on their foreheads represents the masculine side of their personality and aura. This might be the reason behind King James III selecting this mythical creature as the national symbol for Scotland. It’s also a part of the coat of arms from Great Britain. It can be implied that the unicorn is meant to represent peaceful ruling and fair authority over the King’s subjects.

At the same time, the unicorn holds a deep connection with the moon and the night. These symbols are in turn associated with the feminine forces of the universe, as well as intuition and magic. These apparently contradicting concepts display the perfect balance and transformation the unicorn represents.

This last concept is also validated by the legends that speak of the unicorn’s ability to change its shape to whatever they desire. They may be a white, immaculate horse one minute and a human being the next.

It’s considered that there is no stronger magic than that of the unicorn. They are capable of galloping between realms as well as time and space, as they are not limited by the same rules as men and beasts are.

The Greeks seemed to be the first ones to describe the uniform in a written form. It wasn’t exactly the same mythological animal like the one we know nowadays, but it had a very strong resemblance and was said to bring good luck to all those who saw it.

During medieval times, it was said to only appear to virgins and became a sign of chastity and purity.

The Christian faith believed its horn to be pure and benevolent, and they thought that adding it to holy water would only maximize its benefits. They bought what was supposed to be unicorn’s horns, but historians actually believe that it must have been teeth or narwhals or rhino horns.

It was also widely believed that this white, immaculate being had healing powers and could save even the sickest patients from the brink of death.

The symbolism of the unicorn has always been deeply linked to long and prosperous marriages. This is because they were usually linked to virginity and purity, thus making the new bride a perfect prospect for any potential groom. They were a sign of chaste and perfect love.

Taking advantage of the unicorn’s supposed fascination with virgins, hunters were said to lay traps to catch the coveted beast. Of course, since this creature is completely mythological, these accounts are figments of people’s imagination, but it’s nonetheless quite telling of how important the unicorn’s qualities were to men.

A young, virginal maiden would sit under a tree and wait for a unicorn to approach her. When it inevitably laid down and rested its head on her lap, the hunters would wait for it to fall asleep and catch it to remove its horn.

If the unicorn is your spirit animal, then you are most likely a creative person filled with imagination and ideas to make the world a better place. Some people may call you a dreamer, but you are someone who is always trying to find new solutions to old problems.

You are probably also truly intuitive and connected to the hidden energies of the universe, so it’s a good idea to try and follow your gut every time you have a feeling about something. It’ll probably lead you on the right path.

As unicorns are said to be able to travel through realms, they are excellent messages for the dead and the divine, such as angels and deities. They can bring messages to help you get rid of negative energies and heal your soul in times of hardship.

Those who feel the unicorn is their spirit animal are usually natural-born travelers, always desiring to go on a new trip or adventure. It doesn’t necessarily have to involve taking a journey abroad, it can be anything as simple as trying a new experience.

You tend to be particularly sensitive to negative vibes and energies, so you will immediately pick up on someone around you being sad, angry or scared. You probably try to avoid environments that make you feel uncomfortable, as you naturally search for locations and people with good, wholesome energies.

Other people tend to perceive you as trustworthy and innocent, perhaps even mistaking virtue for naivety. Don’t let this affect you: The unicorn may be attracted to purity, but it’s also a strong and willful creature, so you also share those powerful traits. If someone tries to take advantage of you, you’ll be able to defend yourself and stand your ground.

You probably prefer working in a group than alone, as cooperation and teamwork are two values you highly appreciate. You are a naturally social butterfly, and enjoy hanging out with people, making new friends wherever you go.

This can also be related to your aura and the way you make people around you feel. When your friends and loved ones are close to you, they feel accepted and joyful, so you are certainly a great company to keep around!

Usually, those who have the unicorn as their spirit animal make great doctors, nurses, teachers, and diplomats. They are happier when helping those in need and spending time around people, so try and search for a profession that allows you to achieve both these goals at the same time and you’ll deeply enjoy your job.

Generally speaking, the symbolism of the unicorn in dreams is usually a positive one. There are a few exceptions, but more often than not, it’s considered a good omen.

They represent prosperity, purity, good fortune, and happiness, as well as purity and transformation, as previously discussed.

A unicorn galloping towards you

If you see a unicorn approaching you, then this is a great sign. It can signify you’ll soon be starting a new relationship if you are single, or your love life will improve if you are already in a relationship.

It can also mean that you’ll be embarking on a surprise trip soon.

The counterpart of this dream is seeing a unicorn flee from you. This is one of those rare occasions when dreaming about this mythical creature is a bad sign. It’s a way your subconscious has to tell you that you are doing something that goes against your values and morals, and should revise your past behavior. You are feeling guilty about a mistake you’ve made and feel like you are losing your virtue or innocence.

This is a great dream, especially if you feel excited while riding the unicorn. It signifies that you’ll soon be blessed with abundance and success. You will probably come into money or get the job you’ve been striving for.

If before riding it, you catch the mythical creature, then this means you’ll soon reap the reward of an effort you’ve been doing for a long time. Perhaps you’ve been working out, or studying hard. Whatever the case, you will soon find yourself achieving the goals you were pursuing with such determination.

Pampering and feeding a unicorn

If during your dream you find yourself petting a unicorn, then you might be taking for granted a blessing you’ve received. It’s important to take the time to stop and smell the roses, or you’ll miss the great things you have in your life.

Perhaps you don’t spend enough time with your loved ones or friends, or don’t stop and enjoy the work you are doing. Try to slow down and look around. It’s important to enjoy this moment of your life, instead of being blinded by what you are trying to achieve.

If instead, you are feeing this unicorn, then you’ll soon be experiencing a period of great happiness and joy. All the problems you’ve been dealing with will vanish and you’ll finally be able to relax and enjoy a moment of peace and quiet.

When encountering a unicorn that has been captured with evil intentions, and you free it from its captors, you should consider this a good omen!

If you’ve been dealing with a lack of creativity lately, you’ll soon grow out of it, and be able to use your imagination for whatever goals you are trying to achieve.

Though most unicorns are usually depicted as being all white, in dreams this can certainly change.

White unicorns represent purity and happiness. Seeing one means you’ll be overcoming adversity and triumphing over your enemies.

If you see a golden unicorn, you’ll soon be able to get rid of any and all negativity you’ve been dealing with lately. It’s a good time to try new habits and become healthier, as you’ll be filled with determination.

You may encounter a black unicorn, and regretfully, this is not a good sign. It’s a warning that you are involving yourself in an activity that can end up being harmful to you. Try and change your ways before it’s too late.