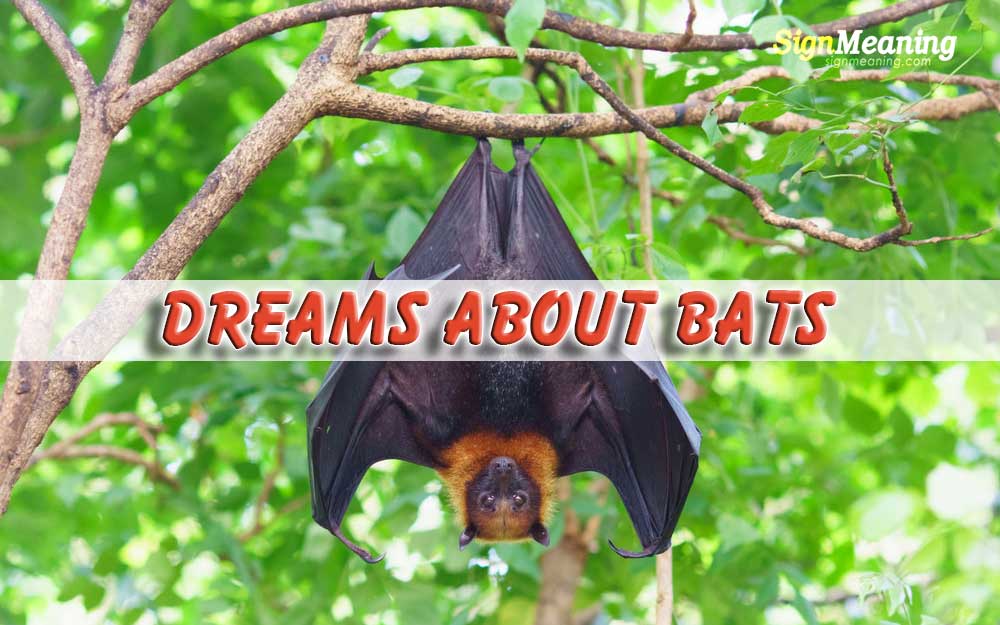 Bats are mysterious and winged creatures who have always been associated with the dark, the occult and sometimes even evil. But what does it mean to dream about bats? And what is the biblical meaning of them?

In this article, we’ll take a deeper look into this puzzling animal.

Dreams About Bats – Meaning and Interpretation

Dream about Bats Entering Your House

If you dream about bats flying into your home, then this is a bad omen. Something bad is about to happen in your own house or apartment. It might happen to either you or a loved one, like parents, siblings, significant other or offspring.

This might even come to affect the entire family, like some kind of disease that runs through all through the household, or perhaps deal with an act of violence such as a robbery or a fight you won’t be able to stop.

It could also mean that someone you love will get into a massive argument with someone else in your family, and this could force you to pick sides, even if you’d rather avoid doing so.

Dream about Killing Off A Bat

Having a dream about bats being killed implies you’ll finally let go of something bad you’ve been dealing with in your life. It might be the memory of an ex, or perhaps even getting rid of a negative influence. You could have been surrounding yourself with toxic people and are finally realizing it’s time to walk away from them.

It could also have to do with anxiety and obsessive thoughts you might have been dealing with lately. The good news is that you’ll soon find a way of resolving these issues and moving on to happier times.

Dream about Being Bitten by A Bat

If you have dreams about bats and you are bitten by one, then someone in your life is spreading nasty rumors about you. It probably is someone who you are trying to grow close to, so it’s a warning you have selected the wrong person to get into your life.

This bite represents the sting being betrayed by someone you tried to give your trust to and failed. It’s important you stop and take a good look at those you’ve surrounded yourself with so that you are not heartbroken when this person betrays you.

Dream about being Attacked by A Bat

If the attack is different from a bite, such as a scratch, then you are probably making rash decisions and not stopping to think about the consequences of your actions. Though it’s a good thing to follow one’s instincts, it’s important to analyze the ramifications of our decisions, or the results could be harmful to both you and those you love.

Try and think back on what you’ve decided to do in the past few weeks because you might still be in time to solve the mistake you committed.

Dream about being Chased Around by A Bat

This dream is deeply connected to your love life. If you are single, you might be experiencing doubts about someone you have developed feelings for. They might be sending you mixed signals, and making it hard to know if they are really interested on you or if they are simply leading you on.

This person is probably someone who both attracts and confuses you, perhaps they are mysterious and secretive, or they just won’t open up to you.

If you are in a relationship, then there is a side of your partner that’s being kept in the dark and you are unconsciously worried about it. It would be a good idea to sit down and have a heart-to-heart with your loved one and clear the air once and for all. The secrets they’ve been keeping from you can destroy your relationship in the long run if left unspoken.

Dream about A Bat Infestation

Having dreams about bats infesting your home or a place you frequent, is a strong sign that you’ve been holding back in your life.

You might have been harboring negative feelings and thoughts because of unresolved problems you are dealing with. Maybe you are aching for a new opportunity in your job or a new experience in your private life. You are probably feeling stuck, so it would be a good idea to try new horizons and change your daily routine.

If you have a dream you’ve been too afraid of going after, then this might be the right time to go after it. Perhaps you should begin that entrepreneur side project you wanted to pursue, or ask for a raise at your workplace. This dream is a sign that you should go for it!

Dream about Bats Flying Around You

If you have dreams about bats soaring the sky above your head, or flying close to you, then this is a dire warning you should not ignore.

This is an incredibly bad sign, so be very careful during the days that follow. You might be involved in an accident or attacked by someone, and it will be completely unforeseen and unexpected. This dream gives you the possibility of avoiding being hurt, but in order to do so, you have to be careful and remain alert.

The good news is that your friends and family members will be there for you, and support you through this ordeal, so you’ll know who your true allies are.

Related post: The Spiritual Meaning of Dreaming about Horses?

Having a dream about a white bat is among the worse omens you might receive. If you see one while you sleep, then this means someone you are close to will either get gravely ill or perhaps even die in the near future. It’s important that you tell your family members to visit the doctor, so that they can get themselves checked out just in case. They might be able to be healed if they catch the problem in time.

Biblical Meaning of Bats in Dreams

The bible describes the bat as birds, even if they are not so. They are viewed as unclean and dark, and are related to ruin, bleakness and unhappiness.

Dreaming about one, then, is viewed as an incredibly bad sign as far as the catholic faith is involved.

The bat is described more than once in the scriptures as vile and detestable creatures, such as in Leviticus 11:13-20. They are said to bring darkness into any place they fly into. It’s also forbidden to eat them, as they are considered filthy and wicked.

So, according to the bible, there is no good interpretation that can be linked to the bat. If you are catholic and dream about this creature, it’s important that you take a good look at the way you are living your life and try to fix the mistakes you’ve been making. Perhaps then you will be able to live a happier, fuller life.

1 thought on “Dreams About Bats – Meaning and Interpretation”