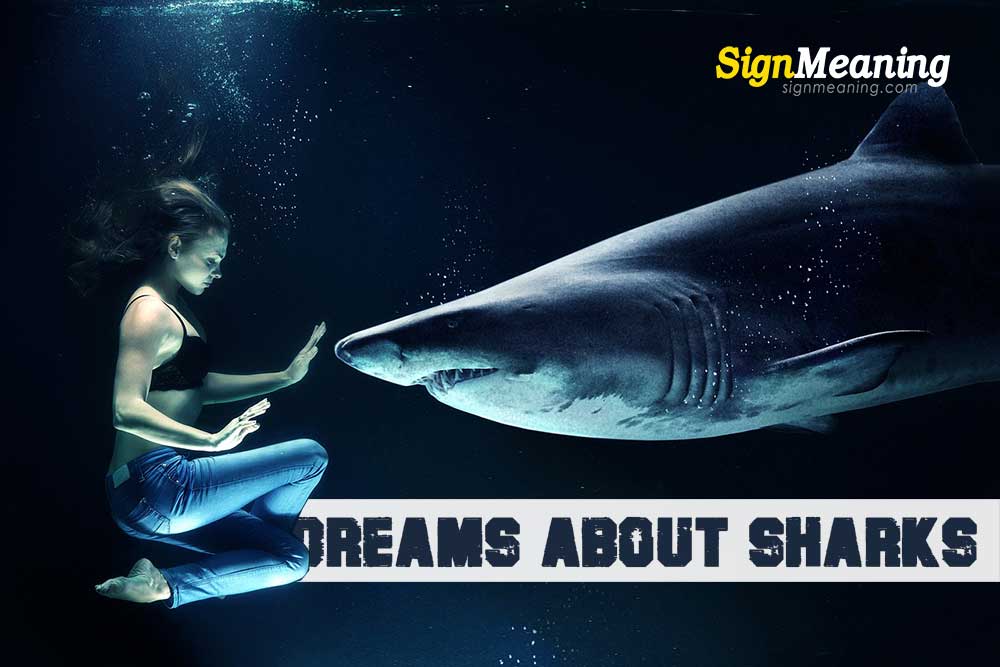 Sharks are deeply associated with determination, aggressiveness and obsession, as well as fierceness and being ruthless when it comes to pursuing your goals. Which is why, positive or negative, dreams of sharks will always be related to following your desires and dreams, sometimes at all costs.

In this article, we’ll discuss all possible interpretations that can arise when you dream about sharks. Some might be omens, some might be warnings, but one way or another, it’s always better to understand the message your subconscious mind is trying to convey.

What Does It Mean When You Dream About Sharks Attacking You?

If you dream about sharks attacking you in the sea or river, then this means you better be on the lookout, as you will suffer from an accident in the near future. It might be a work accident, or it can happen while you are walking down the street, so it would be wise to be extra cautious for a while.

The good news about this dream is that you will be more careful as a result of it, you will be able to avoid the accident altogether if you remain attend to your surroundings.

Try and remember how the attack felt and whether it caught you by surprise. If you were scared or shocked but you weren’t bitten, then the accident will be minor, but if you got seriously hurt, then it will involve far harsher consequences.

It the shark was swimming fast towards you before the attack, then this means you will be suffering from this issue sooner rather than later.

Where Did The Shark Bite You?

The location of the bite is far more important than you may think, so try and remember this detail if you can.

If you were bitten on your leg or you ended up losing it due to the bite, then this means you should be careful about the life choices you’ve been making as you’ve most likely committed a massive mistake due to your pride or ambition.

If you were bitten on the hand or arm, then this represents your work environment: You might be feeling bullied or unappreciated in the place you work in, and your coworkers might even be hostile toward you.

If you are eaten as a whole, or swallowed without being bitten, then you are feeling vulnerable and unable to defend yourself against people who have authority over you. It’s a sign you are frustrated and angry but feel powerless to defend yourself in any way. Perhaps you are very non confrontational and have a hard time standing up for yourself, but whatever the cause of this problem, you’ve had enough of it and are ready for a change.

Perhaps you were bitten on the face, this signifies that you are overly concerned with your appearance and should try and relax somewhat when it comes to your looks. It’s causing you unnecessary stress and your mind is telling you to let go of the issue and enjoy the way you are.

If You Fight Back During An Attack

Experiencing dreams about sharks attacking you and actually fighting back means that you are done accepting people taking charge of the decisions in your life. You are ready to be the one on the driver’s seat instead. Good for you!

This might be an ideal moment to finally go for the goals you’ve held onto for a while now. Perhaps open your own business, start an entrepreneur project, ask out the girl of your dreams, or any other secret desire you’ve been putting off due to your fear of failure or rejection.

If during your struggle to survive you end up catching or killing the shark, then this is a great sign! You will be able to finally overcome a complex situation you’ve been dealing with, and emerge victorious from the whole situation.

Being Chased – But Not Caught By A Shark

Finding yourself being chased by a shark in your dreams is a signal that you should focus all your efforts and skills to avoid failing during a difficult moment you’ve been facing or are about to face. Don’t just procrastinate and wish for the best, because you will inevitably fail if you do.

It’s important that you try your hardest and work hard to achieve your goals, as the problem at hand can easily turn into an advantage if you do so.

Watching Others Be Attacked By Sharks

If instead of being attacked by sharks yourself, you have dreams about sharks attacking others, then this means that you identify with the traits usually related to this animal.

You may be the kind of person who preys on the weaker links at work in order to gain an advantage for yourself, or who exploits the softer sides of those you’d like to date to get them to like you. It’s a sign that you would be rather successful in jobs considered more ‘aggressive’ intrinsically, such as business and stock trading.

It’s great to be ambitious and determined at work, but do remember that sometimes your ruthlessness can hurt those you love and care about. This dream might also be a warning that you should soften your ways around your family and friends to avoid unwittingly hurting them.

Watching A Shark In An Aquarium

If you see a shark in an aquarium or any other non-threatening scenario, then this is not a sign of danger, but rather deeply connected to your sexual life.

Maybe you’ve been bored recently with the way it’s been developing and might have fallen in a bit of a routine. If you’re dating someone or married, maybe you should spice your sex life with new and exciting ideas, and if you are single, maybe you need to try and find a person who better fits your desires. Whatever the case, this dream is a sign that you desperately need a change, and you shouldn’t ignore this problem, as it will only continue to grow as time goes by.